Calheta Recreational Port | Luis and João Guilherme Costa at the anniversary of Tecnovia Açores | The Province of Los Rios recognises Tecnovia for its performance during the construction of the Ventanas Bridge | Puente Ventanas [Ventanas Bridge], the 1st Tecnovia bridge in Ecuador | Estadio Arena Marítimo [Marítimo Stadium]

Investment in the maritime economy, through expansion to naval infrastructure and recreational navigation concessions, namely the Calheta Recreational Port and the Ribeira dos Socorridos Shipyard, in the Autonomous Region of Madeira.

Inauguration of the new Estádio Arena Marítimo [stadium], a high-end project which added to our skills and experience building sports infrastructure.

Delivery of the 1st bridge erected on the American continent, the Ventanas Bridge over the Zapotal River in the Province of Los Rios, Ecuador.

In southern Angola, the bridge over the Cuito-Cuanavale River was inaugurated, at the location of the mythical battle of Cuito Cuanavale in 1987/88 (considered the most prolonged battle on the African continent since World War II), a design-construction project that we built in a record time of 9 months. 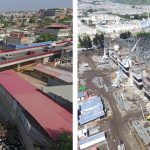 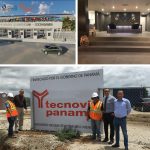