The project at Uíge Airport, now the Manuel Quarta Punza Airport, was inaugurated on 29.05.2014, and included the remodelling, expansion and equipping of the airport terminal. The remodelled terminal has an area of 4600 m2 and a refurbished control tower. The length of the runway was increased from 800 to 2300 metres and its width from 30 to 45 metres, so that it can now service the Boeing 737-700 W and similar aircraft. 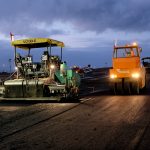 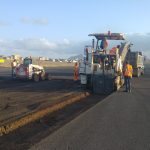