Contracted by the Ministry of Infrastructure and the Maritime Economy of Cape Verde, for a total of 1 984 618 315.06 ECV, the contract for the renovation of the S. Domingos / Pedra Badejo / Calheta bypass on the island of Santiago consisted of renovating the existing cobble-stone national road spanning a total of 32 kilometres, between November 2010 and January 2014.

The main works were the removal of the existing cobbled surface and the implementation of a new pavement structure (sub-base, base and wear base bituminous concrete layers), correction of the shape of the road at critical points, implementation of reconditioned longitudinal drainage in concrete, strengthening of the existing transversal drainage, construction of a 320 metre long tunnel, and the installation of horizontal and vertical signage and security barriers. In urban areas, the areas surrounding the road were also rehabilitated.

The Pedra Badejo tunnel, with its two one-way lanes, a 90 m2 cross-section and a length of 320 m is the only tunnel in Cape Verde with a permanent lining created with a 5.70 m mould. 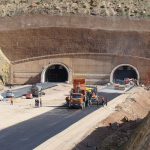 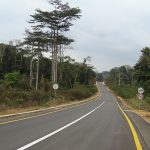