The bridge is a mixed metallic structure with a length of 110 m, composed of 3 sections and a 45 m central span, with pillars set in shoes which are grounded on piles with a diameter of 800 mm.

The main structure is made of metal (2 longitudinal beams and transverse beams) and was later set on pre-slabs and reinforced concrete on-site. The entire metal structure was launched from one of the banks.

It was the first bridge in Ecuador with seismic shock absorbers.

The project also included accesses spanning 500 m, including a roundabout on the E25 (Quito-Guayaquil link). 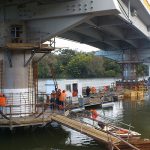 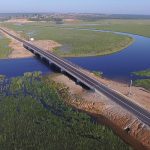