Bridge over the Lomba Stream

Povoação, Island of São Miguel, Autonomous Region of the Azores

Carried out for the Autonomous Region of the Azores’s Secretariat for Agriculture and the Environment, between October 2016 and July 2017, this bridge was constructed to replace the existing bridge that was in poor condition due to bad weather.

The foundation consists of 1 section with a 24 m clear span between joints, 6 “I” shaped pre-stressed beams, 1 metre high, set 1.6 m apart and solidified on-site by a concrete slab which includes pre-slabs that act as formwork between the beams.

The pre-stressing was performed through post-stressing by a specialised Tecnovia team, using two 7 wire cables and one 5 wire cable for each beam. The high-strength steel composing the wires has a 1860 MPa strength class, with a 1.4 cm2 cross-section.

Due to the limited access to the beams these were produced on-site, using sliding molds supported on the joints.

The connections are of batholith reinforced concrete on 12 micro-piles placed in two longitudinal alignments. 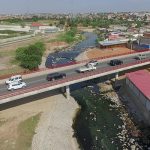 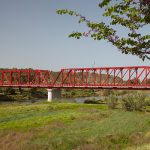